Visiting this website, and all sites operated by the Stena Metall Group, is subject to the terms described below. This also applies to all websites, applications, and services that carry references or links to our cookie information.

This site contains so-called cookies. The information collected and stored through the normal use of Stena Metall websites is used to ensure website functionality, improve user experience, integrate with social media and show relevant ads based on your interests.

Most browsers have a default setting that accepts cookies. You can easily deny Stena Metall Group websites from storing cookies on your computer by changing the settings on your web browser to block or delete them.  Instructions about how to do this will be in your browser and can be found by using the help function.

Additional information regarding personal data, consent, data requests and much more can be found under Privacy Information.

The Stena Metall Group seeks to sustainably use resources. Material recycling is on the increase, while energy usage is being reduced by improved working methods and new technology. Through more efficient processing, both profitability and the Group’s carbon footprint are improving.

The Group has been carrying out structured improvement work for several years. Business area Recycling was the first to introduce a comprehensive, lean-inspired program for more efficient production. The program, called Stena Way of Production (SWOP), was introduced in 2013. It has since been developed and implemented in several other business areas. This methodology was also applied to recycling branches, under the name Stena Way of Branches (SWOB).

The program focuses on continuous improvement work, through a unified approach that has helped the Stena Metall Group become a learning organization, whose operations are safer and more cost effective.

At Stena Aluminium, continuous improvement work has led to highly efficient production processes. The focus is now on guaranteeing and improving internal logistics, as well as energy efficiency. At Group level, management systems are being developed to further harmonize working practices within and between the different companies and departments.

The Stena Metall Group works on process and energy efficiency in a systematic way, with ambitious goals, mapping and follow-up. Stena Components, which carried out an energy survey of its Nybro facility in 2012, has been working systematically to reduce carbon dioxide emissions. In Denmark, Stena Recycling is working with energy management systems under ISO 14001 and has reduced electricity consumption by 4 percent. Throughout the Group, use of renewable energy, such as hydroelectric power, is increasing. The possibility of expanding the use of fossil-free fuels in on-site vehicles is also being assessed.

Transportation, in the production of recycled raw materials, is a significant source of emissions for the Group. However, from a lifecycle perspective, the overall environmental impact is less than if virgin raw materials were used. The Group’s companies strive to coordinate and streamline their transportation and resource flows. Optimizing transportation between facilities is the most effective way of reducing this throughout the value chain. As a major purchaser of transport, Stena Recycling has managed to reduce emissions per tonne of material transported. In Sweden, emissions have decreased by 45 percent since 2008.

Stena Recycling in Poland has made minimizing transportation an important part of its procurement process - with the aim of significantly reducing carbon dioxide emissions. Many companies have decided that a larger proportion of their vehicles should achieve Euro 6 classification, both their own vehicles and those of their subcontractors. Stena Stål makes a commitment to report on carbon dioxide emissions, throughout the value chain, in all its new customer agreements.

Throughout the Group, combined transportation initiatives are being developed. Stena Stål is seeking to increase the loading capacity of vehicles that make customer deliveries. Stena Oil aims to utilize all its free loading capacity. Partly, this is achieved by selling the available space to other companies and also by transporting slops and sludge (oil contaminated water) to shore after bunkering ships. The water is cleaned by Stena Recycling and returned into circulation, while the oil is extracted and reused in industry. The location of the Stena Nordic Recycling Center in Halmstad makes it ideal for recycling materials from other Nordic countries and Poland. Access to efficient road and rail networks, as well as the port, make it an environmentally sound recycling hub. Stena Technoworld’s relocation to the site has allowed it to review its material flows. Moving operations from Malmö to Halmstad has significantly reduced transportation.

In Sweden, Stena Recycling replaces road with rail transportation wherever possible. Most of the trains it uses are powered with electricity with the ecolabel Good Environmetal Choice.

In Älmhult, Stena Aluminium has put the bulk of its material handling under one roof. This reduces transportation on site, giving positive environmental benefits both in and outdoors. Bringing the processing indoors also reduces the amount of runoff water that needs to be handled.

Most of Stena’s companies have implemented measures to reduce water consumption. Stena Aluminium has refurbished its water pipes. Stena Components has installed processes for cleaning and recycling cutting fluid. Stena Recycling in Denmark has established a new water treatment system at its Roskilde facility. The Finnish fragmentation plant uses a minimum of fresh water by collecting and using rainwater. The Polish company has conducted a study aimed at recycling 100 percent of the water used at the company’s fragmentation plant.

The introduction of digitalization and automation is having a positive effect on business practices. All the Group’s operations are taking advantage of technological innovations to rationalize processes and streamline and secure material flows.

The transport management system used by Stena Recycling in Denmark, Norway and Finland (soon to be introduced in Poland) creates coherence and offers total real-time transparency for ordering, transportation and invoicing. The system aims to stimulate fact-based decision-making and provides good opportunities to optimize logistics and value chains.

During the year, Stena Components invested in an automated processing cell in Molkom, which has resulted in more efficient production and higher delivery precision. The company is evaluating additional methods of increasing automation in its manufacturing processes, with the aim of releasing resources for more complex tasks.

“Working towards energy and resource-efficient processes and operations that reduce environmental impact.“

“Working towards energy and resource-efficient processes and operations that reduce environmental impact.“ 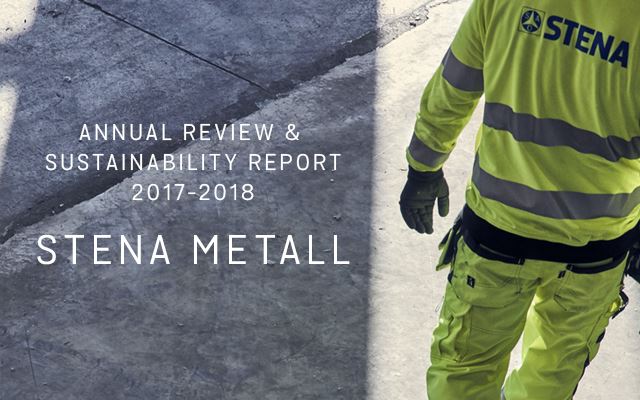 With sustainable services and products, and in collaboration with customers and partners, our operations create value in the form of reduced carbon footprint and more efficient resource utilization.

With sustainable services and products, and in collaboration with customers and partners, our operations create value in the form of reduced carbon footprint and more efficient resource utilization.